Estate agents are famed for their creativity when advertising a house.  “Within walking distance of shops” assumes your name is Ranulph Fiennes. “Purpose built” reminds you that yes, the apartment is part of a lifeless block of identical shoeboxes.

And when I eventually come to sell this house the estate agents will, with a similar level of creativity,  describe it has having a “well-proportioned garden”.  This is because they are not used to including the words “wilderness” or “jungle” in their advertisements.

When to care about crocuses 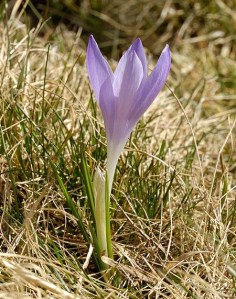 The beautiful flower of God

Now, Oliver recently ventured into the “wilderness” I refer to, carrying a spade.  Presently he returned to show us a flower-bulb he had found.  You may already know that I cannot tell a daffodil bulb from a crocus bulb from a daisy bulb.  OK, I actually do know that daisies don’t come from bulbs, but that’s about as far as my expertise goes.

So I asked Oliver what flower it was.  With a simplicity I could never hope to replicate, he replied: “It’s the beautiful flower of God”.  Which made me realise what an idiot I had been to care whether it was a daffodil, a crocus or a daisy.  It was beautiful, and it was God’s.

Off trudged the intrepid Oliver into the wilderness once more, and for about twenty minutes I caught occasional glimpses of planks of wood being dragged to and fro.  Eventually he came back in and announced that “The beautiful flower of God” was safe.

Closer inspection revealed that the wood had been used to fortify what was originally a Wendy house of sorts, with the beautiful flower of God inside. Each door, each window and (for good measure) the roof had been carefully covered with a series of planks of wood.

Now the invading barbarian hordes would never harm the beautiful flower of God inside.

“That’s a shame Oliver,” I commented. “Now nobody can see how beautiful it is.”

If you believe popular culture, you’d think God’s toddlers see it as our mission in life to erect similar barricades to seeing the pure, unalloyed beauty of  God.

I don’t think this is genuinely the mission for most of us, but whether it’s my mission in life, I know I struggle allowing God to stick up for himself.  I can cling to the layers of interpretation that the church has built up over two tedious millennia of theology – valuable though some of it may be – rather than risk approaching God (and his word) directly.  I can insist on explaining a sanitised version of God to friends, rather than risking them trampling my flimsy assumptions about him.

A comparison to Oliver’s defences is imperfect, as God isn’t as delicate as either a daffodil or a crocus (or, if you must, a daisy).  Protecting God is more like protecting a rosebush.  Or perhaps a man-eating lion.

But the point remains that in allowing myself (and others) to risk questioning assumptions about God; to discover him directly and let go of the barricades we treasure, I stand more of a chance of discovering the beauty behind the rotten planks of wood.

Being God's Toddler by Paul Brownnutt is licensed under a Creative Commons Attribution-NonCommercial-ShareAlike 3.0 Unported License.

What not to burn

In a previous note, I talked about how a well-intentioned Elías (3) thought it would be helpful to put green tinsel on the fire. And while Elías may have missed the point, his good intentions certainly didn’t cause me any problems. Not to put too fine a point on it, he could have burned much worse things.

After all, down the ages people have – with the best intentions – burned all sorts of stuff: other people’s flags; other people’s holy books; suspected witches; and the notable attempt to set fire to a few dozen barrels of coarse-ground black pepper underneath the houses of parliament. Except that it turned out not to be. Sorry Mr Fawkes.

Most of these activities are now frowned on by mainstream observers.

At the swimming pool

The above are, perhaps, rather extreme examples of when good intentions might actually result in bad actions.  But I spotted a less extreme example while we queued up to get into the swimming pool.

For those of you who don’t know, Cardiff International Pool is actually two pools. One pool is a rectangle. You can swim along it one way. And then you can swim back again. All day if you like. The other pool has 3 flumes, a rapid river, a space bowl, a beach area, and a giant model of Albert Einstein’s head that tips vast quantities of water over people’s heads at regular intervals.

There will not be any prizes for guessing which one we were queuing for.

There are also crash barriers. Clearly the designer hadn’t anticipated the pool’s popularity (or perhaps the speed of the tills) and there is insufficient space to queue, so they guide you to and fro along a winding path of crash-barriers until you reach the front of the line.

Of course, when your name is Elías and you are knee high to just about everyone else, there seems little point in following the queue when you can walk straight through the gaps. And so I set about trying to keep Elías close to us in the queue. As the father of several boys, this wasn’t an insurmountable challenge. I’ve faced it before.

In fact, the biggest obstacle was Oliver.

Oliver (7) was intent on teaching Elías the error of his ways, running around him, in front, behind, calling “Naughty Elías! Bad Elías!” to get his point across, while somehow managing to be exactly where he was telling Elías not to be. Within moments Elias didn’t know whether he was coming or going, or whether the whole thing was some elaborate game whose rules he had yet to understand.

“Oliver!” I snapped eventually, “I just want you to set a good example to your brother. I’ll worry about getting him to do as he’s told.”

I felt a similar frustration when Oliver decided to help Dominic (5) learn his reading words for school. All was quiet for some… er… two minutes, before the silence was rent by a terrified scream from Dominic.

I rushed in in time to hear Oliver explain “It’s your own fault Dominic. Bad things happen to people who don’t learn their words”.

I still don’t know quite what happened, but I can’t be alone in having mental flashes of the Spanish Inquisition.

I think most parents would agree that, while it is tremendously helpful for older siblings to set an example to the younger ones, enforcement of the rules should be left to the parents.

Yet it sometimes seems taken for granted (both by God’s Toddlers, and by wider society) that Christians’ main duty is to do – in a spiritual sense – exactly what Oliver did.

Now of course I value the occasions when Oliver tries to explain how to behave well to Elias, and often he gets it right. And in the same vein, the Bible clearly tells God’s Toddlers to pull each other up when we’re getting things wrong. But there’s a difference between passing on our understanding of what the father wants, and trying to be some celestial police force.

Personally, I know I can be convinced that whatever God is teaching me at a given point in time is the most important lesson out there. And I can forget that the father parents all of his children uniquely, tailored to who they are, and where they are in their relationship with him. I’m sure others will have their own variation on Oliver’s rigid approach.

Perhaps we have forgotten that a good parent juggles a host of values- and discipline needs to take its place in the family, alongside trust, acceptance and love. Perhaps, like Oliver, we expect to see immediate results, and don’t trust the way our father works on slow, gradual and lasting growth. Perhaps God’s way seems too risky.

So can we take the risk of living out what we know of God, and loving others the way they are, trusting God the father to do the rest?

At the very least, there would be less flag-burning, and black pepper would be dedicated to salads and spaghetti carbonara.  How much further might it take us?